The village of Weybourne lies just west of Sheringham on the north Norfolk coast. The village was mentioned in the Domesday Book of 1086 when it was recorded as Wabrunna.

A Saxon church served the village, and the 10th-century tower of that church survives today beside the medieval parish church of All Saints, generally known as Weybourne Priory Church.

An Augustinian priory was founded around the year 1200 by Sir Ralph de Mainwaring, incorporating parts of the Saxon church. The priory was never very large, and by the 14th century, it had trouble supporting even one canon and a prior. It was suppressed by Henry VIII in 1536 and the priory ruins can still be seen beside the parish church. Within the church is a copy of the medieval priory seal.

Across from the priory church is the village pub, a traditional 18th-century brick-built inn called The Ship. Also in Weybourne is The Maltings Hotel, a traditional flint building dating to the 16th century.

Weybourne is one of the stops on the North Norfolk Railway (better known as The Poppy Line) which runs from nearby Sheringham to Cromer. The station dates to 1900, and was famously the setting for an episode of the television series Dad's Army, entitled 'Royal Train'.

Weybourne forms part of the Norfolk Coast Area of Outstanding Natural Beauty, and the Norfolk Coastal Path runs along the shore. The coastal path crosses the high cliffs to the east of Weybourne beach before dropping down to the shingle beach, where you will usually find several boats drawn up on the shingle. This is a popular area for dog walkers.

The coast is also a wonderful place for birdwatchers, with common species including ruffs, redshanks, avocets, ringed plovers, and snow buntings, as well as thousands of brent geese who come here in the winter months.

Weybourne is situated where the sandy cliffs meet the shingle bank protecting the North Norfolk salt marshes. This piece of coast is referred to as Weybourne Hope, where there is very deep water close into the shore making it an ideal landing point for an invasion. This gave rise to the old rhyme:

“He who would old England win, must at Waborne Hoop begin”.

So great was the threat in 1588 the area was fortified against possible attack by the Spanish Armada. During the Second World War, there was a large army camp, Weybourne Camp, which was an Anti-Aircraft (ack-ack) Artillery range. The Norfolk coastline here became a military controlled zone and was a restricted area for civilians. Winston Churchill visited the camp twice, and may well have arrived by train at Weybourne station. The camp closed in 1958 and is now home to the famous Muckleburgh Collection, the UK’s largest privately owned working military museum.

Holiday cottages to rent in Weybourne 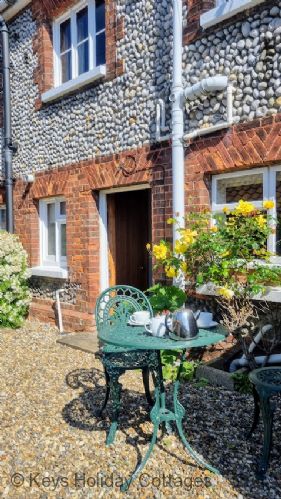 Be the first to hear about news & offers

Please enter your name and email address below to sign up to receive our latest news and exclusive offers via email.